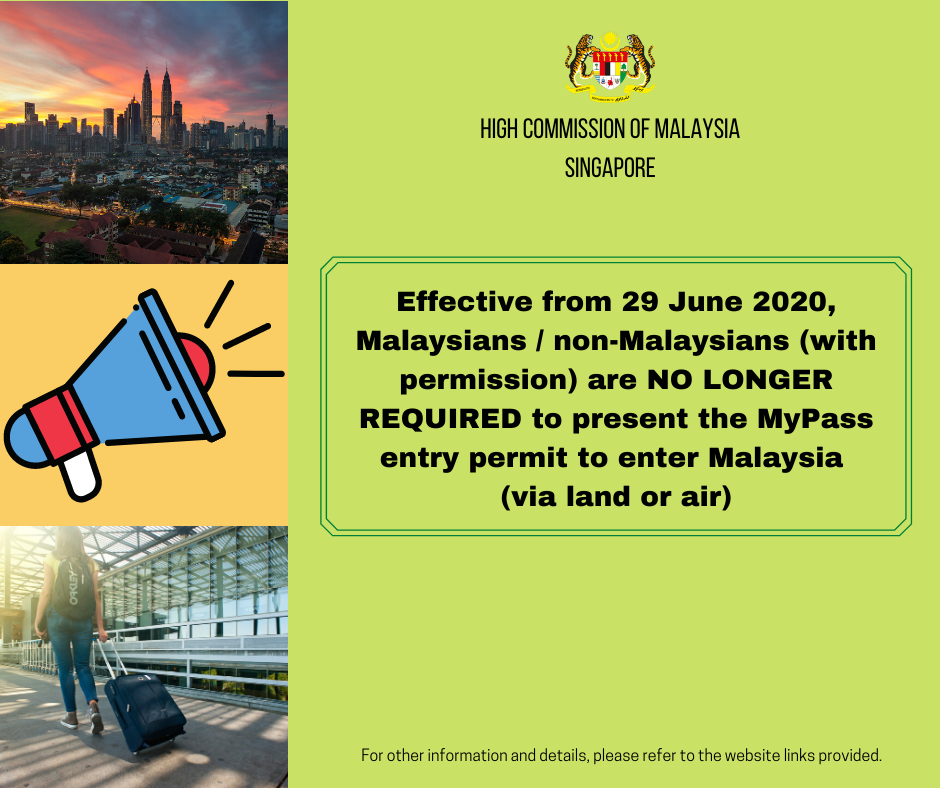 The MyPass permit to enter Malaysia via land or air is no longer required from today, according to the High Commission of Malaysia here.

It applies to both Malaysians and non-Malaysians (with permission), the Commission said in its latest Facebook update today.

Earlier, it was announced that from April 27, they were required to obtain the entry permit from the Commission at least two days before their departure date.

Meanwhile, Thailand today announced it will allow six groups of foreigners to enter the kingdom starting July, as the country has recorded zero local transmission of Covid-19 for the last 35 days.

Centre for Covid-19 Situation Administration (CCSA) spokesman Thaweesilp Wissanuyothin said spouses and children of work permit holders, permanent residents, and foreigners married to Thais would be allowed to enter the kingdom and subjected to a 14-day quarantine.

Besides that, foreigners seeking medical treatment, foreign students and their parents would also be able to enter Thailand and placed under quarantine at state facilities, he added.

A total of 200 business travellers – such as businessmen, experts and professionals – from five countries and territories — Japan, Singapore, South Korea, China and Hong Kong — will be allowed to enter the kingdom every day.

“They (business travellers) are exempted from a two-week quarantine under a fast-track entry. However, they must test negative for Covid-19 before and upon arrival (at the airport),” he said at a daily briefing today.

Thaweesilp said the meeting also decided to reopen all businesses and venues including schools, entertainment outlets such as pubs, bars and karaoke starting Wednesday, with strict health guidelines and social distancing rules.

He said entertainment outlets, which have been closed for more than three months, would be able to operate until midnight.

Meanwhile, Thailand has reported seven new Covid-19 cases, all Thais returning from abroad, over the last 24 hours, bringing the tally to 3,169, with 58 fatalities.