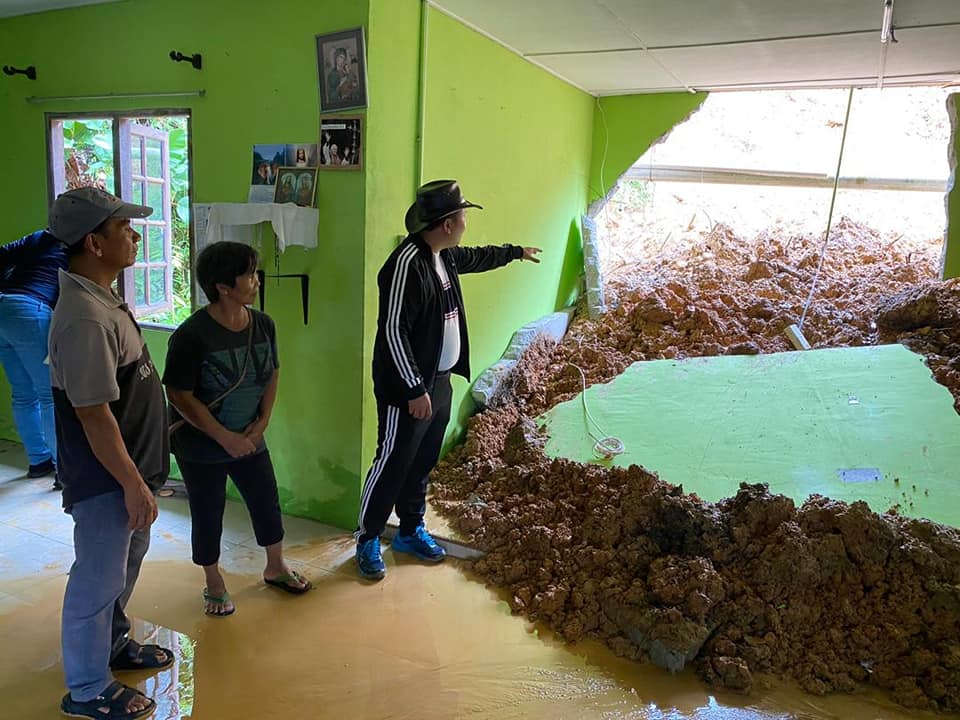 The quick thinking of a 63-year-old grandmother and her daughter saved her four grandchildren from being buried alive when part of their house in Kampung Garung at KM40 of Jalan Puncak Borneo collapsed in a landslide last night.

The brave grandmother, Nona Budis, said the landslide incident occurred at the back of her house at 8.30pm while she was watching television in the living room, while her daughter and grandchildren were in the kitchen.

“Suddenly I heard a loud bang, then the walls of our house collapsed and soil started to fill up the living room.

“Fortunately, at that time, my daughter and my grandchildren were not near the television set in the living room as they would normally be,” she said when met at her house today when Puncak Borneo MP Willie Mongin – who is also the Deputy Minister of Plantation Industries and Commodities – visited her today.

Nona said this is the second landslide incident, following another recently.

In the first incident, she said clearing work was carried out with the help of Willie and Mambong assemblyman Datuk Dr Jerip Susil.

“Currently we are staying at my son’s house.”

Meanwhile, in a separate incident, two houses were damaged due to a landslide in Kampung Annah Sadir, Padawan yesterday morning, at about 3.30am.

The village chief, Sagu Bakong, said the two houses were owned by two single mothers and that the landslide occurred due to continuous rain since Monday.

Separately, Residents in Jalan Bukit Kempas ¼, Taman Bukit Kempas in Johor reacted with shock on Monday upon learning the area was hit by a landslide – as they thought the loud crashing sound they heard was due to heavy rain and thunder.

It emerged that a broken pipe of a tank owned by Ranhill SAJ Sdn Bhd had triggered the landslide, causing part of the hill fronting their houses to collapse.

Most of the residents were initially unaware of the incident as it happened early in the morning.

On realising the severity of the incident, a resident, Ayub Kassim, 68, informed his neighbours to move their vehicles to avoid them being swamped by mudflow from the landslide – 42 residents from 12 houses were ordered to evacuate as the landslide occurred about 10m from the residential area.

The Johor Bahru City Council and Ranhill SAJ jointly cleaned up the area.

in KOTA TINGGI, another landslide was reported to have occurred in a residential area in Bukit Pelali, Pengerang, early Monday morning.

Johor Fire and Rescue Department zone 2 chief Al Hasra Mohamed said the department received a report at 8.40am regarding the landslide in the area.

“Upon arrival, we discovered a landslide had occurred at a height of around 50 metres, involving two unoccupied houses. ‘Alhamdulillah’ (praise be to Allah), no casualties reported.”

Al Hasra said the department then put up markers to check on soil movement and cordoned off the area to ensure outsiders could not enter the affected area.

He said the landslide was believed to have been caused by continuous heavy rain in the district since Jan 1.

The landslide, which affected a 100m-stretch with a height of over 200m, caused a 200m-stretch of the road to be closed.

The cleaning up, which is estimated to take a week, is complicated by concerns that a new landslide might occur due to continuous heavy rain.

He said the department would conduct an investigation to identify the real cause of the landslide.

“In addition to using the route at Taman Sri Impian, road users can also use Jalan Padang Tambak or Jalan Mengkibol to get to Kota Tinggi as well as residential areas near the location of the incident.”