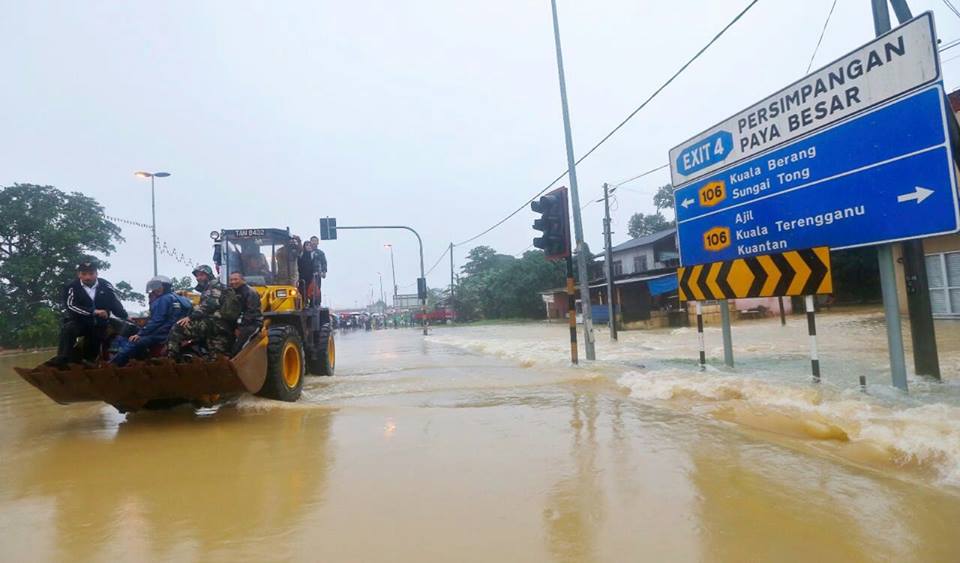 More people are being evacuated in Kelantan due to the floods, with 5,636 people from 1,621 families being accommodated at relief centres in seven districts in the state as at 7am today – compared to 2,652 victims, involving 781 families, last night.

According to the Drainage and Irrigation Department’s website, at http://publicinfobanjir.water.gov.my, the water level in three rivers in Kelantan has exceeded the danger level.

Three rivers showed readings that exceeded the alert level. They are Sungai Galas at Limau Kasturi and Dabong , and Sungai Kelantan at the Customs Jetty.

The Kelantan Social Welfare Department (JKM) has placed various essential supply, including food, at 209 forward bases in preparation for floods in the state.

Director Said Sidup said the food supply included rice, canned food such as sardine, chicken curry, coffee, sugar, milo and mineral water, which would then be distributed to the flood relief centres.

“The Kelantan JKM received an initial allocation of RM1 million from the federal government and RM300,000 from the state government for the purpose.

“The state government has also approved an emergency allocation if the need arises.”

“So far, the supply is enough to accommodate the needs of 13,000 victims for three days.”

In Kuala Terengganu, the flood situation seems to worsen with a drastic increase in the number of evacuees, from 2,387 people (650 families) last night, to 5,807 people (1,719 families) as at 8am today.

The Drainage and Irrigation Department’s website showed five rivers in three districts in recorded reading of above the danger level at at 7 am today.

In Pahang, the flood situation remains the same with three people still at a relief centre in Rompin.

Meanwhile, severe flooding in several areas in the Hulu Terengganu district left about 30 tourists from five families stranded at a mosque in Kampung Pasir Dula, here.

The families took refuge at the mosque yesterday as the main road to Kuala Berang town was cut off, with the water-level rising up to a metre.

Shaarani Ismail, 40, who was on holiday with his wife and four children said the family had long been looking forward to the trip to the East Coast.

“I worked in Terengganu 10 years ago before moving to Perak. So, with the holiday, I also thought it would be a good opportunity to visit the former caregivers of our children in Seberang Takir.”

Shaarani said he was relieved when the Village Community Management Council (MPKK) helped out by placing the family at the home of one of the villagers.

Kampung Pasir Dula MPKK chairman Mohd Azmi Ton Busu, 48, said all the tourists, who were from Perak and Penang, had been placed in villagers’ homes while waiting for the floods to recede.

Separately, a decomposed body without the head, legs, and arms was found on a beach in Kampung Pasir Putih, Merchang here yesterday afternoon.

Marang district police chief DSP Mohd Zain Dris said the unidentified body, a male, was found by villagers at 3.30 pm who then informed the police.

“The victim was found without a head, two arms and both the lower legs and is believed to have died between 10 and 15 days before being washed ashore.”

Mohd Zain said investigations found no element of crime in this case and the body was taken to the Sultanah Nur Zahirah Hospital for a post-mortem.

Those with information regarding the case are urged to contact Marang IPD at 09-6182222.

Meanwhile, Keretapi Tanah Melayu Bhd (KTMB) has announced some changes involving train services from the Tumpat, Wakaf Bharu, and Pasir Mas stations due to the monsoon season in the East Coast.

KTMB corporate communications chief Ahmad ‘Asri Khalbi said in a statement passengers scheduled to depart from the three stations should instead board the train from the Tanah Merah station.

“Train No 27 scheduled to depart from Tumpat to JB Sentral at 6.50pm, will now begin its journey from the Tanah Merah Station at 7.49pm,” he said, adding that the changes would remain until further notice.

Ahmad ‘Asri said passengers could make changes to the date and time of their respective journeys, or cancel their trip for a full refund.

“KTMB also urges passengers to get the latest updates on train operations in the East Coast by contacting the 24-hour Customer Service Centre at 03-22671200.