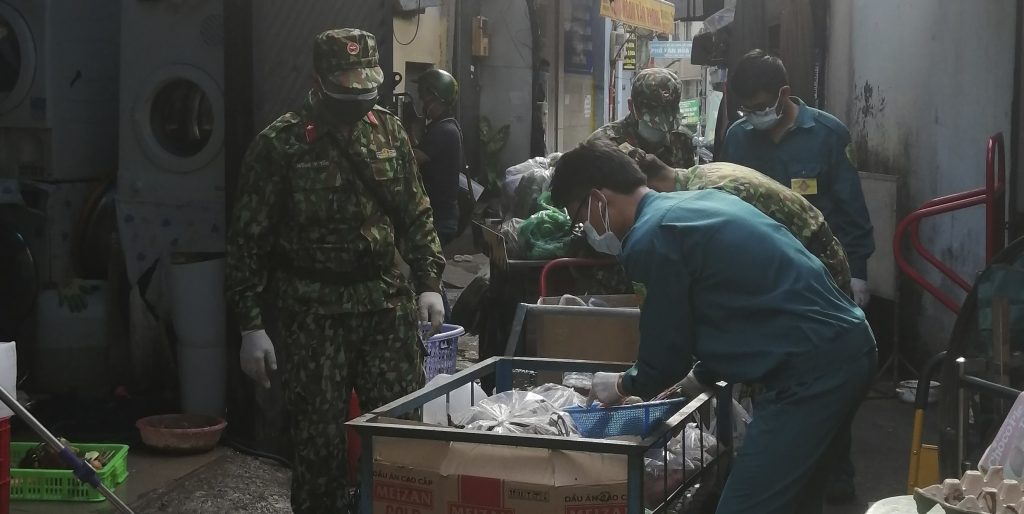 In Ho Chi Minh City, Vietnam’s largest urban area, thousands of soldiers are in charge of purchasing basic amenities for residents in districts most affected by Covid-19 – as they undergo a harsh confinement that bans them from leaving their houses to even buy food.

“The military has been quite strict, but friendly. They have ordered us to stay indoors for our safety and then they have left the food at our door,” said Huong, a young woman living in one of the most affected districts. This week she received her first free food package from the government.

Groceries differ from one neighbourhood to another, as Huong received canned food, oil, vegetables and a package of rice noodles, while in other districts these goods are more difficult to acquire in some neighbourhoods.

The free packages are delivered to special risk areas, while in others the neighbourhood committee organises the purchase with volunteers or passes the list to soldiers, whose photos wandering through supermarkets have flooded the news and social media.

Most of those photos, released by the propaganda departments of the communist regime in Hanoi, show unarmed friendly-faced military, happy to provide vital service to their community.

Although they’ve received many positive comments, some neighbours denounced alleged corruption and inefficiency from soldiers in charge of novel tasks, which has made it difficult to access essential products since the strict confinement began on Aug 23.

Hoa (not her real name), a young woman from the Go Vap district who asked not to reveal her real name, said people in her neighbourhood rebelled against the purchase-to-order system implemented by the military.

“When they arrived at the houses, soldiers asked for a ‘tip’ of 20,000 or 30,000 dong (about US$1) when it is supposed to be a free service, so people no longer want to have their food delivered,” she claimed.

This problem was compounded by inefficiency: a shopkeeper who had between 300 and 500 orders a day to deliver at home in his neighbourhood only managed to dispatch a few dozen with the help of soldiers, who got lost in the maze of streets typical of Vietnamese cities.

“They are in a place that they do not know, with a complicated numbering system for people that are not from here, so they do not know how to find their way around and they take a long time. In the end the store employees ended up doing the work because it was the only way to deliver all the orders,” Hoa said.

In neighbourhoods with the most draconian conditions, where permits to go out to deliver orders are severely restricted, these distribution failures mean agonising waits for basic goods for families who often don’t have the capacity to store many fresh produce.