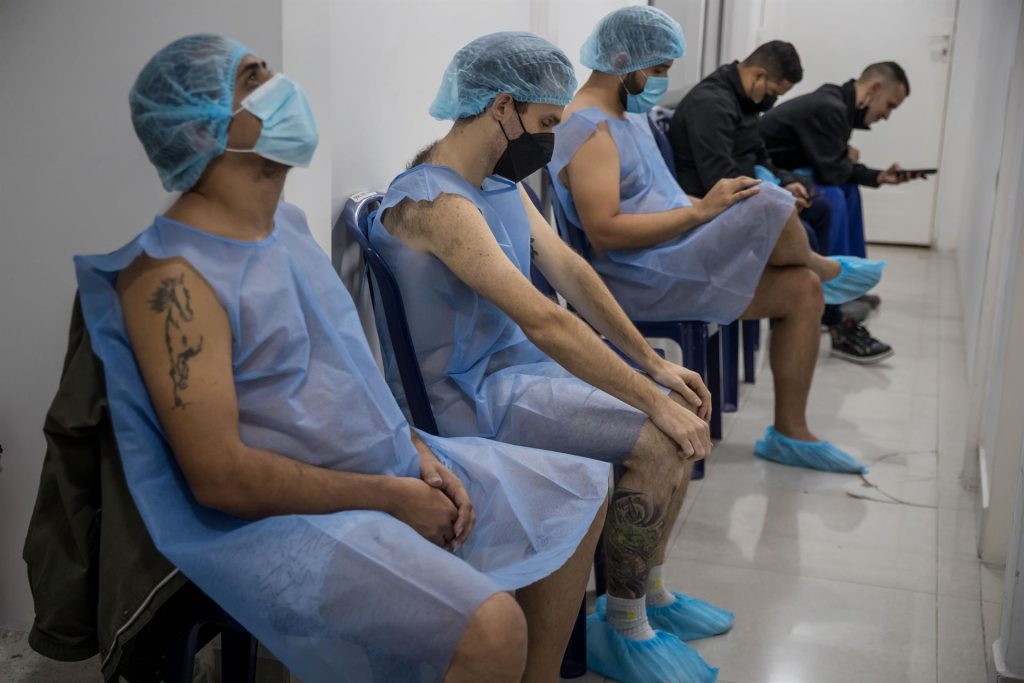 Dressed in just a surgical gown, Armando walked along the corridor leading to the operating room at a family planning centre in Caracas, emerging sterilised shortly thereafter – like 15 other men – after deciding to ignore the macho stigma that persists in Venezuela for men who get vasectomies.

Armando Leiva traveled 700km (434 miles) to the capital from Guiria, a northeastern coastal town, to have the procedure performed.

At age 41 and with two teenage children, he made his decision not only because he doesn’t want to have any more kids but also because his wife experiences hormonal problems with the contraceptives she has used and he wanted to be part of the solution in terms of their sexual life and health.

“My wife handles it another way, but (many) women have trouble with the hormones. It’s more complicated for them and more invasive than for the man,” explained Leiva.

He noted that many men reject having vasectomies due to “something cultural” – holding to the idea that if a man wants to maintain his virility he should not subject himself to any kind of contraceptive measures.

Throughout the morning, the Family Planning Civil Association (Plafam) offered free vasectomies, a programme it’s been running for about two years and where the procedure is performed on an average of 15 patients each day, as urologist Manuel Nuñez explained.

Men of all ages and from different parts of the country come to the centre seeking to have the procedure performed and over a three-week period they receive not only medical attention but also psychological counselling to deal with the definitive transition from being fertile to being sterile, an issue that is barely discussed in Venezuela.

The only available figures on the issue in Venezuela are those from Plafam indicating that, since 2019, 796 men have had themselves sterilised. In general, doctors say that very few men undergo vasectomies in Venezuela, while female sterilisation is quite common and a routine procedure at all health centres.

In the colourfully painted waiting room, the men said they had many and varied reasons for opting for a vasectomy – ranging from the early decision not to run the risk of having any children at all or not wanting to have any more kids, to those who do so to avoid their wives’ having to have the more invasive and involved surgery to have their tubes tied.

Jesus Molina was one of the youngest men there at age 20 and said he opted to have the procedure because he doesn’t want to have any kids.

“I’m having the vasectomy today because I don’t want to be a daddy. I don’t have that feeling of fatherhood,” he said, viewing his decision as a guarantee to help him pursue his long-term goals, without the burden, financial and otherwise, of having children.

Like Armando, many men come to the clinic on the days when free vasectomies are offered, although they still have to pay transport costs to get there. Nevertheless, the free option is a good deal because at private clinics around Venezuela the procedure, including local anaesthesia, ranges from US$500 to US$1,000, some of the patients said.

Compounding this issue, one must add the scanty availability of contraceptives for men in the South American country, with options of that kind largely limited to the barrier method, that is to say to condoms.

“We only have two methods: either we protect ourselves with barrier-type contraceptives, condoms, or we undergo a vasectomy,” the urologist said.

Amid Venezuela’s ongoing severe economic crisis that is making life extraordinarily difficult for many families, Nuñez said the men wanting vasectomies are getting younger and younger.

“We’ve had a rather large number of patients between 18 and 25 years of age in recent months. That’s due to the fact that young people are better informed about contraceptive methods for men and are looking to avoid unplanned pregnancies,” the physician said.

As they awaited their turn, the men shared their experiences before they made their decision. They talked about the fears and taboos they had to break through before they decided to get sterilised.

Upon leaving the surgery room, Diego Vieira said how simple the procedure was and compared it to what his wife had had to go through with other contraceptive measures.

“She had already used other contraceptive methods like the implant (i.e. presumably, an intrauterine device, or IUD), but her body rejected it. In fact, it affected her badly, and she even fainted. So the gynaecologist recommended removing the implant and we tried using the pill, but, of course, (there was) the cost … So, since she didn’t want to get her tubes ties and that’s a very tedious procedure, I decided to have a vasectomy.”

The men said they also had to deal with the jokes and remarks of friends and relatives, who claimed that if they had a vasectomy their sexual performance would suffer even to the point of predicting they’d experience erectile dysfunction.

That uninformed forecast, however, is a far cry from the experience of the men who emerged from the surgical centre on their feet and ready to embark on the journey to more responsible sexuality.