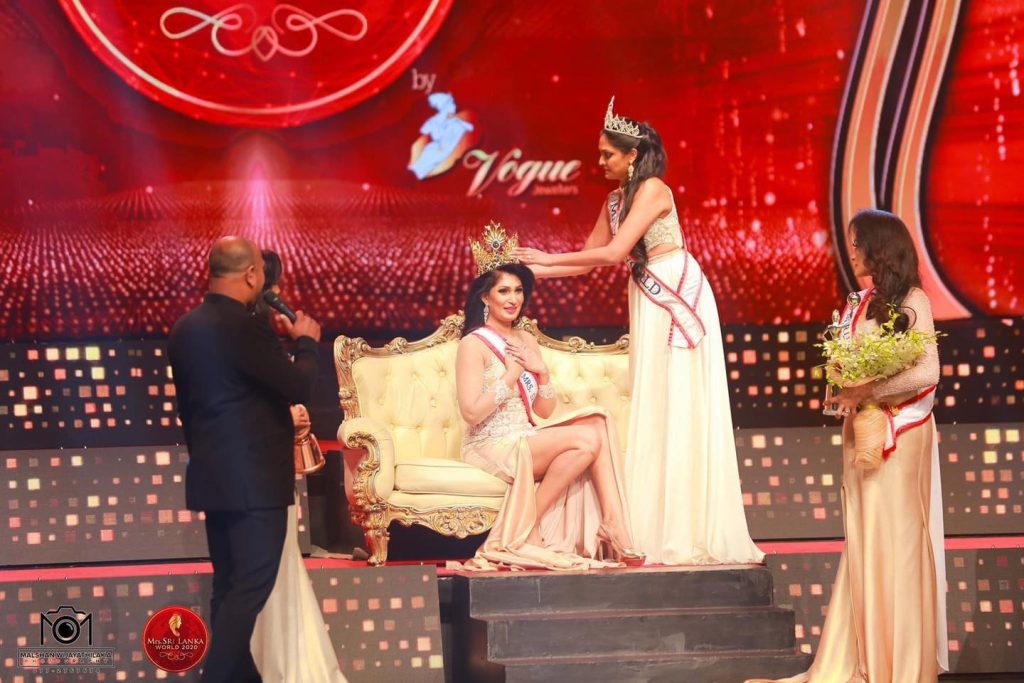 The winner of a beauty pageant in Sri Lanka lodged a complaint with the police yesterday over damage to her self respect – when she was stripped off the crown for being a divorcee.

In her complaint, Pushpika De Silva claimed her self respect suffered a blow when her Mrs World crown was snatched by Caroline Jurie, a former winner of the pageant, soon after she was announced the winner on Sunday.

“I can forgive them but I can’t forget what they did. They hurt my self-respect. Donning me with 500 new crowns will not take the hurt away,” said De Silva.

After De Silva was declared the winner and crowned, Jurie appeared on stage and announced that she failed to meet the pageant’s requirements because she was divorced.

“There is a rule that you have to be married and not divorced, so I am taking my first steps in saying that the crown goes to the first runner-up,” Jurie said before proceeding to take the crown off De Silva.

However on Tuesday, De Silva was crowned again in a much smaller ceremony after organisers of the event announced to the media that she was the rightful winner of the title.

The event came a day after she treated for head injuries at a hospital.

“When she (Jurie) crowned me after I won the pageant it was like she hit me with the crown. The crown was already very heavy and when she pushed it into my head it hurt. Then later she yanked the crown from my head,” De Silva said.

As a result, the following day her head hurt and she fainted due to the injuries from the event. “Even now I am very sick. My doctor said that my pressure was high and asked me to rest.”

Local franchise-holder of the event, Chandimal Jayasinghe, said the incident was disgraceful for Sri Lanka.

“This competition was held for a period of three months. None of the competitors behaved that way. I think she (Jurie) was not happy when her friends didn’t win the crown.”

Police have arrested reigning Mrs World, Caroline Jurie, and a former model on Thursday for assaulting the winner of the Mrs Sri Lanka 2021 competition.

Jurie, winner of Mrs Sri Lanka in 2019, was arrested along with former model Chula Padmendra in Colombo after recording their statement to the police, the law enforcement body’s spokesperson, Ajith Rohana said.

The Mrs Sri Lanka contest is a franchise of Mrs World, the first international beauty contest created in 1984 for married women only, which Jurie won in 2020 in Las Vegas.

In fact, the first winner of the Mrs World competition is none other than the current mayor of Colombo, Rosy Senanayake.

The beauty pageant is a popular event in the country, and videos of the crown being taken from De Silva and being presented to another contestant quickly became viral on social media.