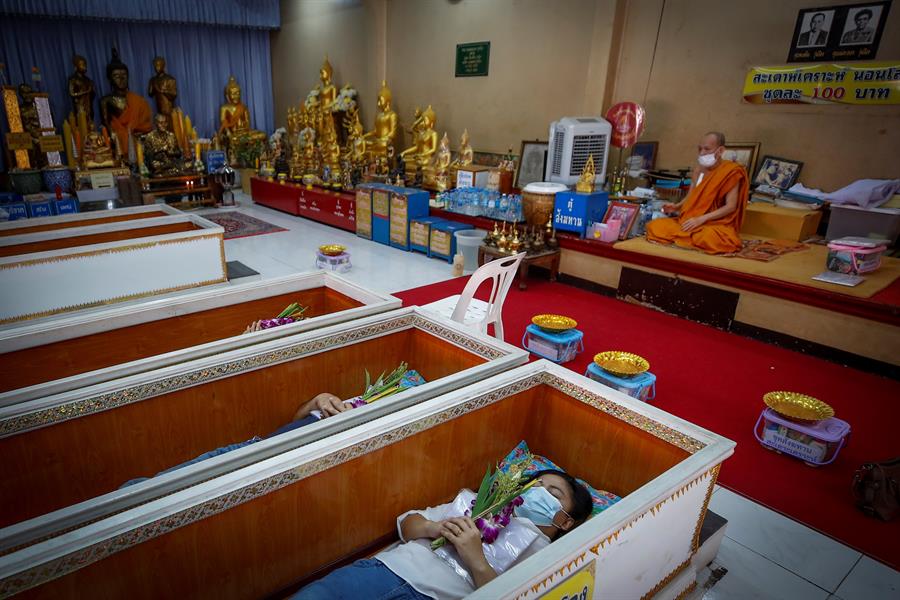 A Buddhist temple on the outskirts of Bangkok celebrates daily funerals in life – where the faithful seek to purge their bad luck and attract fortune through a ceremony, during which they lie down for a while within a coffin covered by a sheet.

“People come when they feel bad, to fight their bad luck or on the recommendation of a seer (…) in search of a new beginning,” monk Prakru Prapath Waranukij, of the Bangna Nai temple in southeast Bangkok, said in a calm voice.

In a spacious room at the entrance to the compound, filled with Buddha statues, representations of spirits and an amalgam of figures of gods from other religions, five white coffins remain in the centre of the room.

From a dais, the Buddhist monk recites prayers and instructions to guide devotees through the different stages of the solemn ritual – for which they have to make at least three small monetary donations.

An assistant covers the coffin with a white sheet and places a thread on the cloth that, through a tangle of threads that runs through the ceiling, makes a connection between the monk – who begins to intone a string of prayers for half a minute – and the coffin.

The attendant removes the sheet, the devotee stands up and lies down again in the opposite direction, with the head to the east to represent the birth, followed by a new series of blessings.

Oraya, 25, claims to feel “relieved” to get out of the coffin and after attending the ceremony for the first time with her sister Pai, 30 – who says that after “the good result” following the rite conferred on her in two previous occasions, she will return “almost every year” to “preserve good fortune.”

“She was a little scared when entering the coffin, but lifting it is like feeling a new life,” said Tayarat, 21, an age considered by superstitious locals as a bad omen.

Other devotees also come to practice the ceremony after suffering bad experiences.

“My boyfriend had a couple of accidents in a week. Some friends told me about this ritual and now I feel like new,” said Naphatsanan, 35, who came to the temple to accompany her partner.

To end the worship, the monk, who gives some personal advice to the faithful, showers the faces of the devotees with a kind of blessed scented water.

The influx of attendees is constant during weekends and holidays, although it decreases during working days, the prelate said in a brief pause after serving more than a dozen Thais.

The Covid-19 pandemic has also dealt a blow to the number of visitors, which has been reduced due to measures to prevent the spread of the virus.

This rite, which is also celebrated in other temples in the country, began to be celebrated in this pagoda in Bangkok about 17 years ago, says Prakru Prapath Waranukij as a new couple comes to the room to participate in the ritual.

About 90% of Thais profess Buddhism, which in many cases is mixed with Hindu and animist beliefs, present in Southeast Asia before the arrival of the first Buddhist monks.