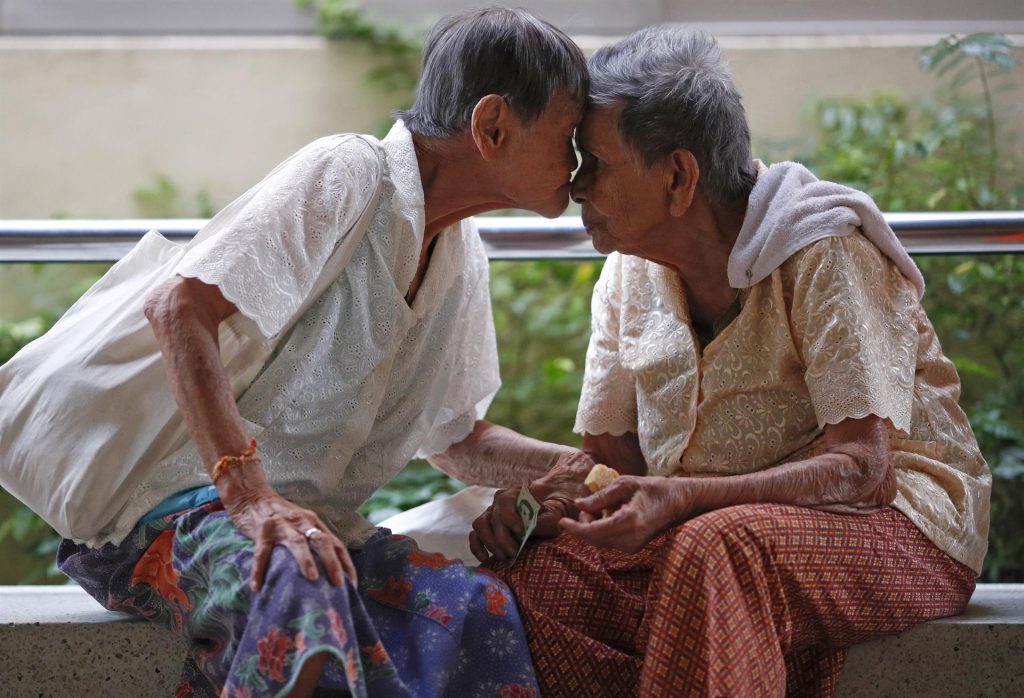 At the Ban Bang Khae care home in Bangkok, a group of older women — many of them wheelchair users — are guided through their morning stretching exercises by caregivers.

The city-run nursing home provides care for elderly, impoverished women who don’t have a home to call their own, and no family members who are able to take care of them.

“I don’t have children, my husband died and I used to work as a tailor. I don’t have any relatives so I have to live here,” says Aom, whose real name was withheld by the centre for privacy reasons.

Another, who is known as Grandmother Lek, says: “I have children but I understand they have to work and have no time to take care of me. So they leave me here. I understand.

“Don’t leave your mother. Please take care of her very well,” she adds.

Thailand has developed rapidly over the past four decades, growing into an upper-middle income country in a single generation as millions of people were lifted out of poverty.

But that massive development and increased wealth — Thailand’s economy grew 7.5% annually between 1960 and 1996, according to the World Bank — has also resulted in a rapidly aging population.

Traditionally, families in Thailand are large, and it is common for three generations to live under one roof. But urbanisation and the changing socio-economic landscape in the Southeast Asian nation have seen living arrangements shift, with more families now living in smaller households.

Ban Bang Khae says they have noticed a 20% decline in the number of older people living with their children over the past two decades as more seniors turn to nursing homes in their later years.

But for many older people who are still in good shape, living out their days at a care home is not on the top of their bucket list.

“I don’t want to stay home and do nothing,” says Chingchai Charnvit, a 67-year-old former banker.

He works at the customer service desk at a Lotus supermarket. Chingchai was hired under the 60 Young Jaew (‘60 Stay Cool’) initiative, a collaborative project between the retail giant and the Labour Ministry to employ retirees.

Nearly 1,000 retirees around the country have been employed under the programme, which is designed to plug gaps in the labour market caused by a long-term shortage of young workers — many of whom are increasingly working in more qualified fields — and declining birth rates.

“I’m glad to work here. My family supports this idea and I can have an income (during the Covid-19 pandemic). My children are grown up,” says Chingchai, who was hired part-time. “I have passion for this job, I work six hours a day and can use my working experience and ability.”

Rising living costs coupled with stagnant wages — a trend that has only worsened since the pandemic struck — means that most elderly people struggle to make ends meet.

An April 2022 survey by the Institute for Population and Social Research found that 99.3% of older citizens in Thailand rely on the government-provided living allowance.

Beyond financial difficulties and their declining physical health, some of the most common issues affecting older people are related to depression and loneliness.

To address these problems — that are often caused by a lack of activities and opportunities to continue contributing to society — a community school for senior citizens holds weekly sing-along and dance sessions.

Every Wednesday, nurses teach local seniors how to stay healthy, provide guidelines for light training regimes as well as meditation and other exercises to stimulate their minds.

“The activities here (consist of) health education with basic (physical) exercise with music for elderly people together with active learning and playing aimed to encourage them to lead good lives and prepare for a quality death,” says Pemonnaree Sootsuwan, who manages the school.

“This is good and fun. I live near here and I don’t have a family.”

In an increasingly digital world, seniors today often need help navigating modern technology just as much as they require physical or mental care.

Since it opened in 2000, the OPPY (Old People Playing Club) has run courses to teach seniors basic computer literacy and enable them to use new forms of technology.

“We teach (our students) basic knowledge of how to use a smartphone, tablet and applications for usage in their daily life,” says Suteera Chamlongsupalak, a teacher at OPPY.

The club’s oldest student is 94-year-old Yongyuth Napasab, who comes to learn how to use Canva, a photo and video editing program that he uses on his tablet to help him get the most out of social media — allowing him to stay connected with his family and friends, and even organise his birthday party when he turns 95.