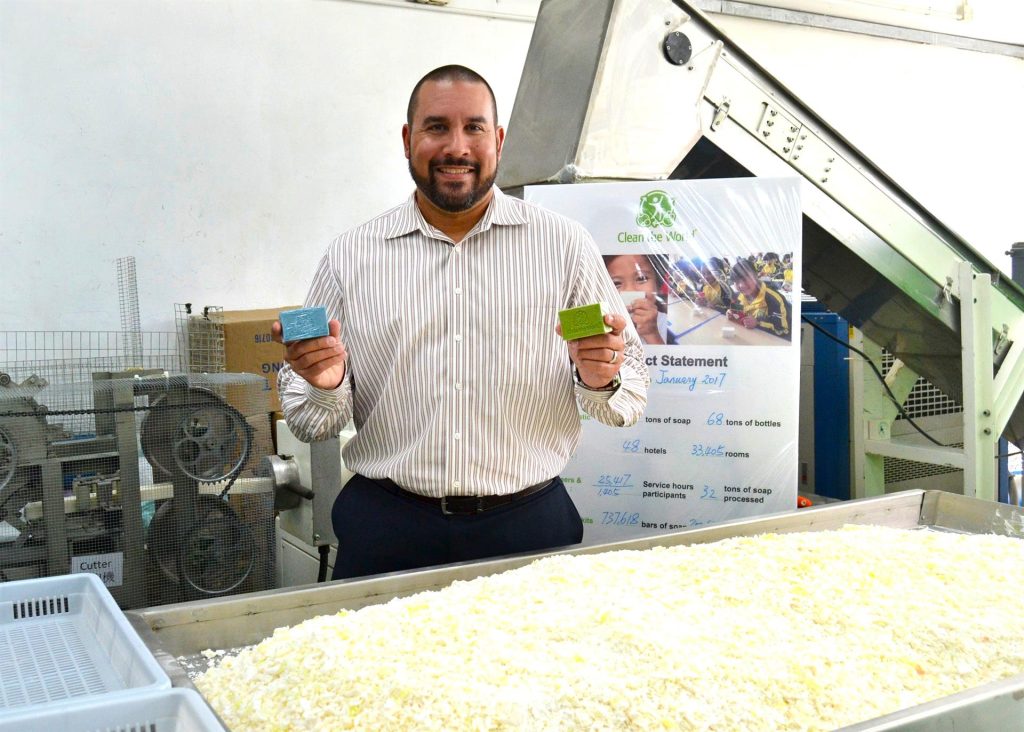 Millions of bars of partially used hotel soap are thrown in the garbage every day and later end up in landfills.

But non-governmental organisation Clean the World is working to remedy this situation, collecting and recycling soap and plastic amenity bottles from participating hospitality partners and distributing them to children and families in countries with high death rates from pneumonia and cholera.

That social enterprise is the brainchild of Shawn Seipler, who realised the extent of this problem when – as a sales representative for a technology company – he would travel throughout the US and sleep four nights a week in hotels.

During a stay at one of these establishments in Minneapolis in 2008, he inquired at the reception desk about what happened to the courtesy bars of soap provided to guests and learned they are often discarded after a single use.

Determined to address this massive waste of resources, that 46-year-old native of Fort Lauderdale, Florida, founded an organisation that has distributed more than 68 million recycled bars of soap in 127 countries since 2009 and prevented more than 1,000 tonnes of soap and other hygiene products discarded by North American hotels from ending up in landfills.

In an interview, the NGO co-founder and CEO said he is proud that Clean the World is contributing to efforts to reduce high death rates among children under the age of five that stem from diseases linked to poor hygiene.

Seipler said that between 2009 and 2020 the number of those deaths fell by 65% – meaning that millions of children are alive today because of greater hand-washing with soap.

Just as some of the world’s biggest companies – Apple, Amazon and Microsoft – got their start in a garage, Clean the World can trace its origins back to the first time Seipler and a group of friends gathered in a small garage and recycled an initial batch of used soap collected from nearby hotels.

From those humble beginnings, Clean the World has signed agreements with more than 8,100 hotels – including large chains like Marriott, Hyatt, Hilton and Walt Disney Resorts that have a combined total of 1.4 million guest rooms worldwide.

The first bars of recycled soap were distributed to charitable organisations based in Florida and arrived in Haiti shortly before the 2010 earthquake that killed around 300,000 people.

Seipler said he was stunned by what he saw in that impoverished Caribbean country.

When a shipment of 2,000 bars of soap arrived at a local church, more than 10,000 people arrived to receive them, he recalled. One of these individuals, a mother with a baby in her arms, told him that two of her children had already died of diseases that could have been prevented with soap and water.

Since then, the NGO has distributed around 3 million bars of soap to that same area of Haiti, while also expanding its operations to many other needy parts of the world – including Central America, Ecuador, the Dominican Republic, the US-Mexican border, Somalia, Syria and many other places.

Clean the World’s dream of helping mothers worldwide was nearly shattered after the onset of the pandemic, when thousands of hotels were forced to suspend their operations.

That crisis caused a temporary but severe interruption to the NGO’s supply chain, although it has since gotten back on its feet.

Now, following Russia’s invasion of Ukraine, it will soon be sending kits with soap, shampoo, toothpaste and perhaps hand sanitizer to two new destinations – Poland and Romania, a pair of countries that are taking in hundreds of thousands of Ukrainian refugees.