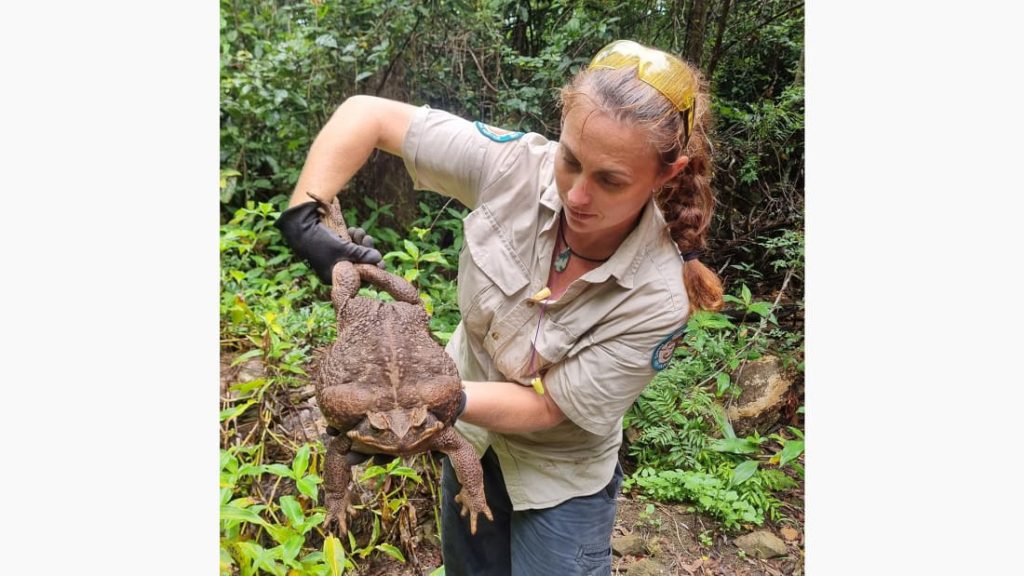 Rangers conducting track work in Conway National Park, near Airlie Beach, some 600km south of Cairns, were shocked to find this massive cane toad beside the Conway Circuit last week.

Ranger Kylee Gray said a snake slithering across the track forced them to stop their vehicle and when she stepped out and looked down, she gasped when she saw the monster cane toad.

“I reached down and grabbed the cane toad and couldn’t believe how big and heavy it was.”

Dubbed ‘Toadzilla’, this behemoth was found to be 2.7kg when weighed at the rangers base. A cane toad this size will eat anything it can fit into it’s mouth, and that includes insects, reptiles and small mammals.

Some cane toads can get to 26cm, weighing 2.5kg, and the introduced species can be poisonous to wildlife as well. The previous Guinness World Record for the largest toad was set in 1991 by Prinsen, a pet toad in Sweden, which weighed 2.65kg.

‘Toadzilla’ has since been “euthanised due to the environmental damage they cause,” the Queensland Department of Environment and Science wrote in its tweet, with the Queensland Museum interested in taking her remains.

Originally from Central America, cane toads were first introduced to Australia in 1935 as a biological control against cane beetles.