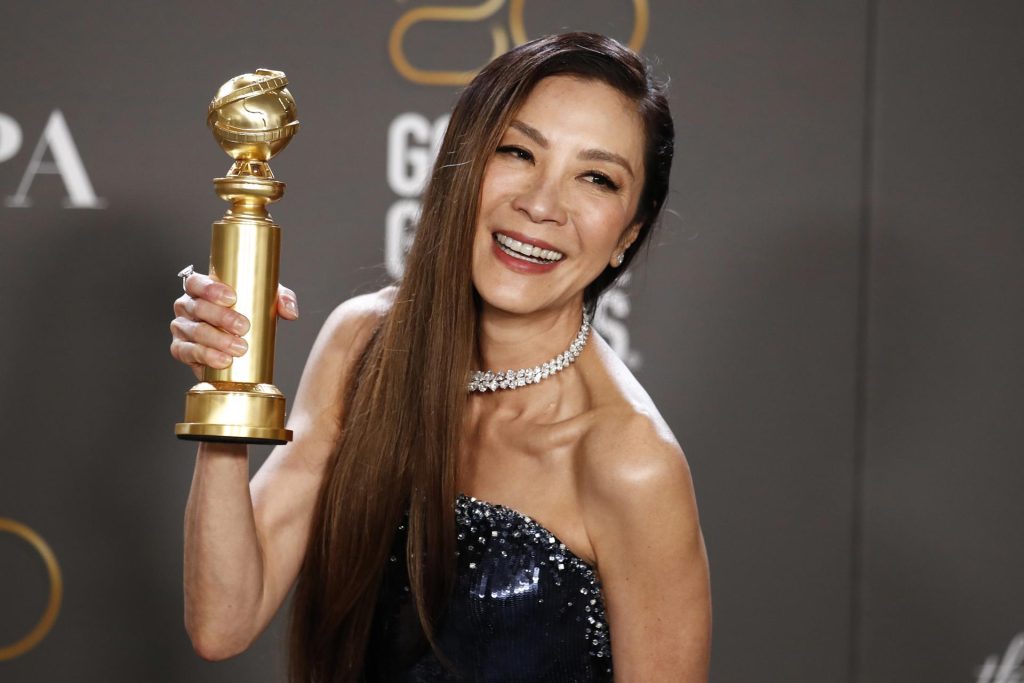 The 80th Golden Globe Awards returned yesterday as an ode to diversity and Everything Everywhere All at Once star Tan Sri Michelle Yeoh received the best actress in a comedy or musical award.

In her acceptance speech, the Ipoh-born woman, aged 60, recounted how difficult her career had been as a Chinese origin Malaysian woman in Hollywood – what more to be the first Malaysian to win.

Her triumph came on a day when Steven Spielberg – together with stars from Asian, Black and Latino communities – took centrestage and shared the hardships they have faced in making a place for themselves in Hollywood.

The awards, which seemed on the brink of extinction after two years of intense criticism and boycotts due to accusations of corruption and lack of diversity, tried to bounce back in style as the organisers tackled these questions with self-deprecating humour.

African-American comedian Jerrod Carmichael, who hosted the event at the Beverly Hilton, was the first to comment that last year’s awards were not televised because the Hollywood Foreign Press Association – the organisers – “didn’t have a single Black member until George Floyd died.”

Spielberg and his autobiographical drama The Fabelmans – inspired by his childhood, stole the night by winning the best drama film and best director awards.

A visibly emotional Spielberg said he had been hiding the story since he was 17. “Everybody sees me as a success story (…). But nobody really knows who we are until we’re courageous enough to tell everyone.”

Mexican director Guillermo del Toro, who received the best animated film award for his Pinocchio, said he was happy to be present at the ceremony in an “incredible year for cinema.”

In one of the most emotional speeches of the night, Argentine filmmaker Santiago Mitre – who received the best foreign film prize for Argentina, 1985 – highlighted the importance of continuing to fight for democracy.

He dedicated the award to the people “who have fought for democracy in Argentina since the dictatorship and continue to do so,” in the backdrop of his film that follows the trial of those responsible for the oppressive Argentine dictatorship in the 1980s.

Martin Mcdonagh’s The Banshees of Inisherin was the most awarded film of the night – winning the best picture, comedy and musical award along with best screenplay (Mcdonagh himself) and Colin Farrel grabbing the best performance in a musical or comedy prize for the film.

The best actor in a drama picture award went to Austin Butler for his performance as Elvis Presley in Elvis, while Cate Blanchett took the best drama actress prize for Tár.

The diversity of this year’s awards was once again on display when Indian composer MM Keeravani edged past pop superstars like Lady Gaga, Taylor Swift and Rihanna to lift the best original score Golden Globe for Natuu Natuu from Indian blockbuster RRR.

In the television awards, Abbott Elementary (best musical and comedy series) and The White Lotus (best limited series) were the most awarded series with three and two prizes respectively,

Game of Thrones prequel House of the Dragon won the best drama series award at a night when Zendaya received the best TV actress in a drama prize for the second season of Euphoria, while Kevin Costner took the best TV drama actor award for Yellowstone.

The Bear, Dahmer Monster: The Jeffrey Dahmer Story, Ozark, The Dropout and Black Bird figured among the other notable TV series to be honoured during the night.

Producer Ryan Murphy, who received the Caroll Burnett award, highlighted how difficult it is to be a part of the LGBT community in the US as well as any other part of the world.

“For those kids watching tonight, I offer up MJ (Rodriguez) and Billy (Porter) and Niecy (Nash) and Matt (Bomer) and Jeremy (Pope) as examples of possibility. There is a way forward, use them as your North stars,” he said, pointing to celebrity members of the community present at the ceremony.