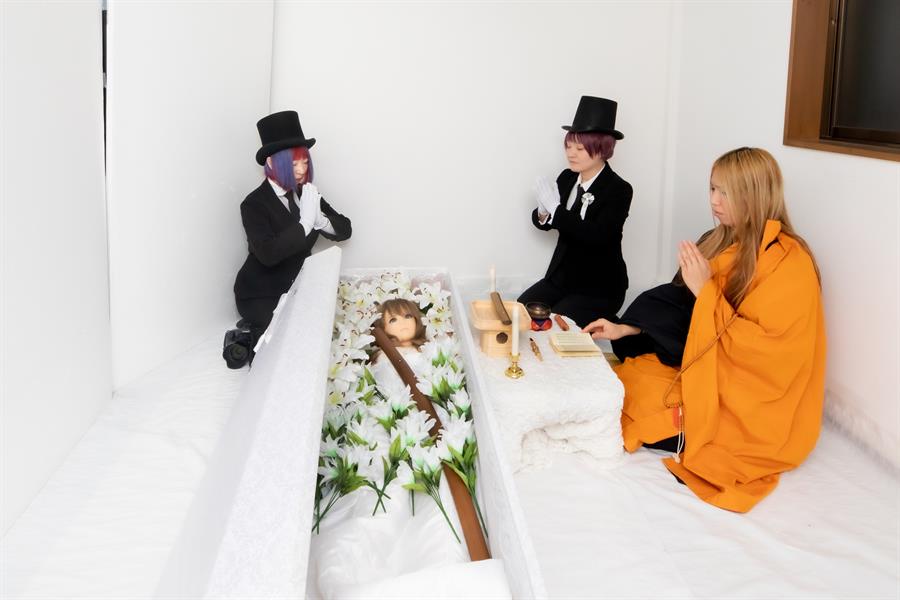 In setting up Love Doll Funeral, Leiya Arata sought to dignify love dolls, also known as sex dolls, with the same last-rites given to humans.

Many owners in Japan consider the dolls to be their life partners.

“I started the business because I felt its need its need strongly,” said Arata, a photographer in her 30s who runs a studio in the western city of Higashiosaka. “We want the dolls to be treated with respect.

“There are few business operators who treat and dispose of them properly. They treat love dolls as ‘things’. Some even resell them without the ex-owner’s permission.”

The discovery of sex dolls in the trash often leads to humorous posts on social media and has sometimes even led the police to mistake them for an abandoned corpse.

“I don’t want this to happen, for it promotes a biased view of love dolls and their owners,” Arata insisted.

Although some Japanese temples hold funeral ceremonies for dolls, stuffed toys and other possessions – when it comes to love dolls “their silicone materials, big size, and sexual explicitness become a problem and they tend to be rejected,” the photographer said.

Japan’s oldest sex-doll manufacturer Orient Industry – in business since 1977 – does hold an annual ceremony for the “partners” who are returned to them over the years, but this is purely process and not a funeral.

Arata expects to hold around 20 services a year. “I personally feel fewer is better, for I don’t want owners and love dolls to be separated.”

Love Doll Funeral offers three plans, with the cheapest being a joint ceremony for multiple dolls for ¥33,000 (US$300) – where the client receives a death certificate and a photo of the services

The most expensive ceremony, priced at ¥99,000, allows the mourner to attend the event and receive a video and a part of the doll as souvenirs.

When asked, Arata is emphatic in rejecting any concerns that Kato’s links to the industry undermine the project’s credibility.

“Not at all. I don’t know anybody who understands sex, love dolls and their owners and gives a proper ceremony better than her.”

Emotional attachment to sex dolls is not limited to Japan.

The sex toy market, which includes the dolls, has been growing across the world and according to a study by stats website Statista, it is expected to grow around 9% between 2019 and 2026 to reach a value of US$52.7 billion.

“More and more people in the world, especially men, are drawn to love dolls rather than human women,” noted Natsumi Ikoma, a professor at the Center for Gender Studies in Tokyo’s International Christian University.

“In Japan, these people are perhaps more visible, because of its huge love doll industry and the prevalence of sexualised imageries.”

She points to two main factors which could be contributing to the phenomenon – the proliferation of virtual communication, which substitutes the need for interaction in person, and the growing dominance and acceptance of sexualised manga and CGI content.

Although sex dolls continue to be stigmatised, their image is widely distributed in Japan through magazines, films or comics.

Indeed, highly sexual content is available even in 24-hour convenience stores, a fact which has been repeatedly criticised in the country.

“AV (audiovisual content) and pornographic manga are the main source of sex education for young kids in Japan,” Ikoma said.

It is one of the unresolved issues in Japan. Sex education in school is still limited to teaching the biological differences between the male and female bodies, which in many of the textbooks are depicted in clothes.

The curriculum does not discuss sex, contraceptive methods, or different sexualities.

“When there were no love dolls, people had to give up their fantasies and negotiate with real people

“But now they have love dolls, why do they have to bend their wishes to go out with real people?” Ikoma said, adding this led to a “very problematic” ideal of femininity.

“Forever young, pretty, accommodating. Nothing you can aspire to,” was how she summed it up.