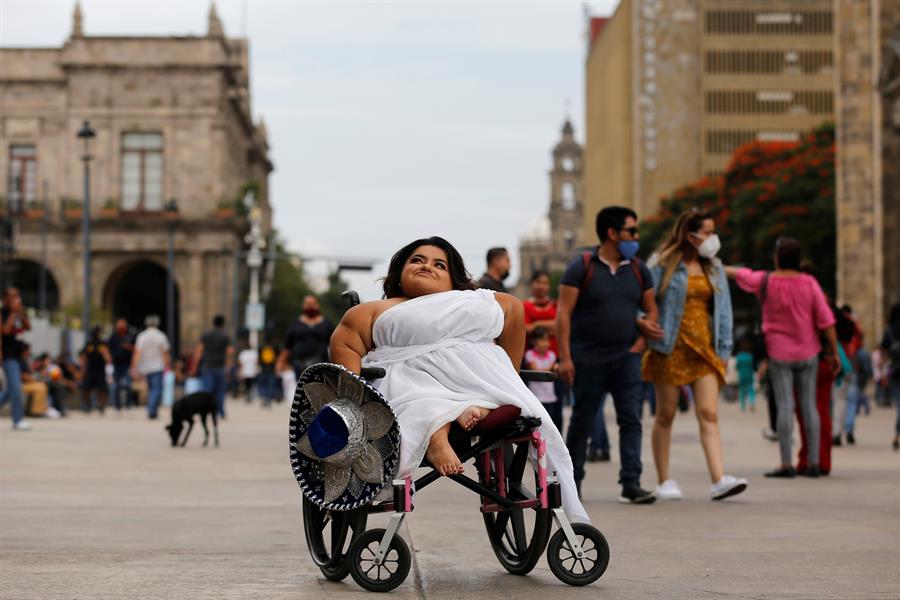 Karla Casillas was born with a rare, incurable genetic disorder known as osteogenesis imperfecta – or brittle bone disease – an illness that forces her to use a wheelchair.

But that condition will not keep her from representing the western state of Jalisco in Miss WheelChair Mexico, a beauty pageant whose broader purpose is to promote the inclusion of people with disabilities.

Casillas’ bones are thin and delicate and any type of blow or sudden movement can cause them to break. In an interview, she said that as a child, the mere act of sneezing caused her to sustain as many as 80 fractures.

The 34-year-old has lived in the city of Guadalajara since she was a young girl, having moved there from her native Culiacan. She has had to use a wheelchair at all times since her early years because the size of her legs and the fragility of her bones prevent her from standing for long periods of time.

Casillas said she has suffered from different types of discrimination and rejection – and must cope every day with a lack of disability-inclusive infrastructure.

“The toughest thing has been the social rejection because the worst disability is ignorance. When I started looking for a job I got really desperate because I couldn’t find the right place. And I’d go to interviews and when I got there they’d tell me they were on the top floor, as though they were mocking me. And that’s very frustrating at times.”

Despite those obstacles, Casillas earned a degree in psychology and became the owner of a human resources agency. She also has occasionally worked as a model and wears dresses and high-heeled shoes that accentuate her attractiveness.

Motivated by her experiences, she began working to promote inclusion and respect for disabled people – and that path led to her discovery of the Miss WheelChair Mexico pageant, whose next edition will be held in January in the Caribbean resort city of Playa del Carmen.

“It caught my attention (as a way) to show there doesn’t need to be any contradiction between disability and attractiveness. They go hand in hand. Women are beautiful by nature and just because we have a different condition we can still show that in a beauty contest … Besides, it also serves to break stereotypes,” Casillas said.

She noted winning the pageant would give her a bigger platform for advocating for equality for disabled people and help her promote more work opportunities for men and women with this condition.

“I could be a great spokesperson for people with disabilities, helping to empower and guide them, not only women but also men. We’re all capable and have the right and the same opportunities with respect to any type of service. Above all we shouldn’t be seen as a vulnerable group but rather as a person with a different physical condition.”

“There’s normally a type of beauty in conventional pageants, a (standard) measurement, age and height. And we want to break with all of these stereotypes.”

Over the course of three days, the 20 contestants will take part in activities that include parading on a catwalk wearing the traditional attire of the state they are representing.

Beyond their physical beauty, the contestants will be evaluated on their attitude, acceptance of their condition, activism on behalf of people with disabilities, commitment to service, talent and performance on stage, Valdez said.

She added that the intent of the Miss WheelChair organisers is for contestants to be able to participate in conventional pageants in the future and thereby break the taboos about aesthetics and beauty.

“Why can’t a woman with a disability be in a conventional pageant if she’s a woman at the end of the day?” the pageant director mused.