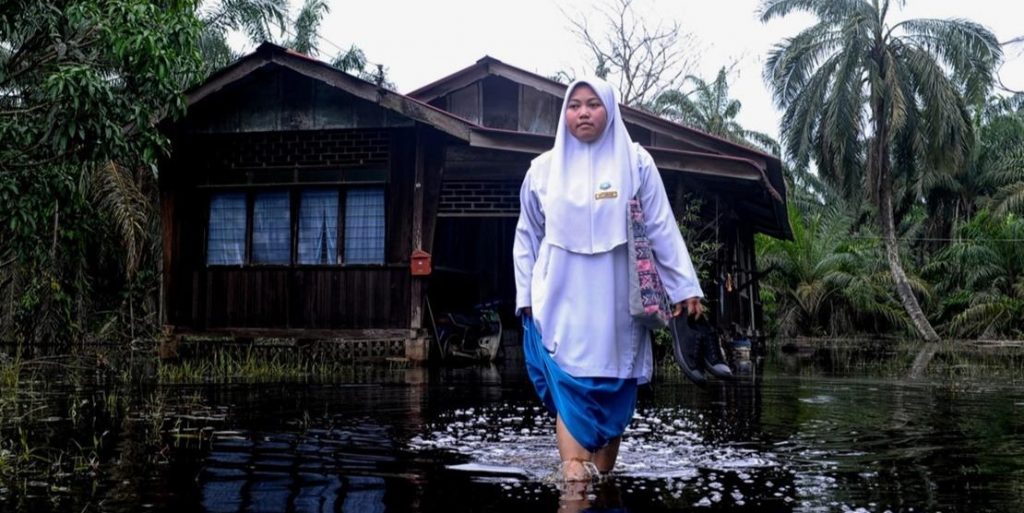 A Form Five student of Kampung Parit Pulai, Parit Sulong here hopes the flood that hit her home since last Saturday, would soon recede, as she has to attend school from today.

Siti Noraini Matsuki of Sekolah Menengah Kebangsaan (SMK) Penghulu Saat admitted such a situation has made it difficult for her to go to school as she needs to wade through the floodwater.

The accounting stream student said flooding was her second test after the Sijil Pelajaran Malaysia (SPM) examination was postponed to March next year due to Movement Control Order (MCO).

“Prior to this, my school session was postponed due to the spread of the Covid-19 pandemic which required me to undergo online classes.

“Now, the school sessions resumed today, I need to leave home at 6am as I have to wade through floodwaters to reach my school,” she said when met at her house here today.

The third of six siblings said she was the only one among them who need to attend school as she would be sitting for SPM.

“Before this, I stayed at the temporary relief centre (PPS) at Sekolah Agama Seri Tiga Serangkai last Saturday before being allowed to go back to my house last night to prepare for school.”

Earlier, the PPS was opened on Saturday following a six-hour non-stop downpour with the water level rising up to a metre.

Checks found the floodwater began to recede at 2pm, and 78 victims from 14 families are still housed at the relief centre.

State Health and Environment Committee chairman R. Vidyananthan said three PPS were in Muar, Pontian and Kulai and closed in stages from 2.30pm to 4pm.

“Muar still has the highest number of flood victims at 223 people from 61 families, followed by Batu Pahat with 211 people from 45 families while Pontian recorded 206 victims from 55 families,” he said in a statement.

In GUA MUSANG, about 50 Form Five and Six students of the Orang Asli community in the district were brought to their school hostels yesterday by the Department of Orang Asli Development (JAKOA) to attend school starting today.

Nenggiri assemblyman Ab Aziz Yusof said the students – who live in Pos Bihi, Gob, Simpor and Belatim – were brought out yesterday by four-wheel drives by Kelantan JAKOA to eight schools in the town.

“They departed yesterday at 9am and arrived at 4pm at their respective schools because of the bad condition of logging tracks due to rain. They are staying in the hostels and began their classes today like other students.”

He said he was made to understand that a number of Orang Asli students who could not return to school today, would do so on Sunday by the same transport.

Meanwhile, Ago Along, 53, from Pos Simpor said his daughter Anis, 17, a student of Sekolah Menengah Kebangsaan (SMK) Tengku Indera Petra 1 here, was excited to be able to return to school today.

“Although she faces challenges to get her school, she is still in full spirit to study again after being stuck for three months in the village due to the implementation of Movement Control Order (MCO).

“Facing hardship to go to school is nothing new to us, Orang Asli community, due to lack of facilities compared to other communities, however, I hope Anis will study hard and obtain excellent result in her studies.”