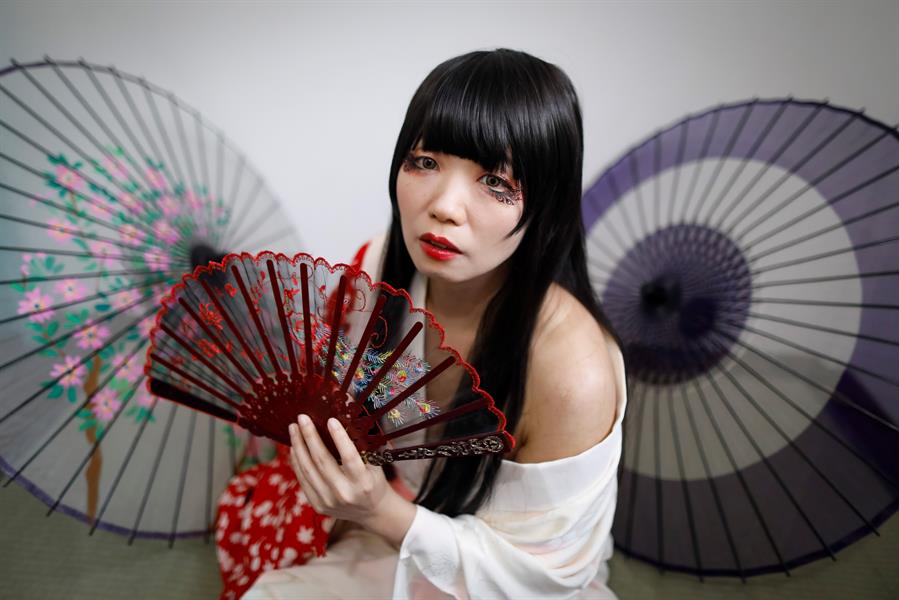 Customers are asked to keep conversation to a minimum upon entering Leiya Arata’s home studio in Osaka. By the time makeup and costumes are done, they are expected not to utter a single word – their transformation into a doll now complete.

“I wanted to be beautiful and be possessed by someone. Not to be dominated, but to be loved and cherished, like sex dolls are,” said Ai Kaneko, a 39-year-old single nurse who travelled down from Tokyo.

Kaneko says the ‘factory’ saved her life from suicidal thoughts she began to have 15 years ago after finding the body of her boyfriend, who had hanged himself.

“For many years after my boyfriend’s death, I was very unwell. I tried to kill myself many times.”

Arata’s unique services have provided her with more stability.

“It has become a place to cling to,” Kaneko says. “When I feel like I can no longer go on, knowing that I have this place makes me strong, very strong.”

The strain Kaneko feels is, sadly, quite common in Japan’s highly regimented society.

As the Japanese proverb ‘The nail that sticks out will be hammered down’ implies, people in Japan are under enormous pressure to conform and avoid becoming that nail — an outlier from the rest of society. Many feel suffocated having to live within the confines of such strict social norms.

That is where Arata and her ‘factory’ of fantasies come in, catering to those with desires and dreams that might not be welcome in mainstream society.

As well as providing the chance at regenerative transformation with the human love doll package, Arata offers another peculiar ceremony in which people can say their final farewells to love dolls or sex dolls – which have become dear companions to many people in Japan, a country known for its high rates of social alienation and isolation.

The issue has even led to a phenomenon known as “hikikomori” (Japanese for “pulling inward”) — reclusive adolescents and adults who have completely withdrawn from the rest of society.

Starved of human companionship, many in Japan grow emotionally attached to love dolls, – going so far as holding funerals for these life-sized plastic partners.

In the corner of the room, two of Arata’s own sex dolls appear to mourn the ‘passing’ of Ran.

A central aspect of Japan’s Shinto religion is animism, the belief that spirits inhabit all things, big and small, natural and man-made.

Holding funeral rites for sex dolls – rather than merely disposing them as garbage – is an extension of ‘ningyo kuyo’, a common Japanese practice of holding farewell ceremonies for dolls, says Kato, who plays the role of undertaker.

“A Buddha statue is a ‘thing’ but we worship it because we believe Buddha lives inside of it. The same goes for everything that we love and cherish, including sex dolls/”

Using the samurai sword, Kato points out that Buddha is neither male nor female. “Buddha teaches us to accept and love who we are. We have to learn to love ourselves.”

Arata agrees that her services conform to Buddhist beliefs, and says she wants to help sex doll owners have best possible way to send off their loved ones.

“These dolls are much more than sex partners for them. They are their family and we want to treat them as such”.

But Arata’s services also offer clients the opportunity to explore their own mortality, with the Shitai-labo, or Corpse Lab, which allows people to experience a sort of pseudo-death.

Customers must request in advance how they wish ‘to die’ or ‘be killed’ in minute detail so that Arata can properly act out their fantasy and enhance the sense of reality as much as possible.

Megumi Kazuki, a 38-year-old sex counselor from Osaka, wanted to be ‘murdered’ by her former partner whom she broke up with a few months ago but still has feelings for.

“I wanted to be murdered by him so that I can forget about him once and for all and move on with my life.”

Once the ‘murder’ is complete, Kazuki lifts herself up off the studio floor, smiles and breathes a deep sigh of relief. “I have been released. I feel great! I felt happiness with every part of my body.”

Another customer who came to experience the fake death is dressed in a woman’s clothes and calls himself by a woman’s name, Mako.

“Maybe I’m a bit like them,” Mako says. “I don’t want to be a woman. I’m just attracted to the female version of myself.”

“It’s a strange feeling of my body being taken over by a female version of me,” he adds. “It’s like moulting. Becoming something that isn’t really me but is still me.”

Lying inside a coffin and listening to a chant by the blonde-haired monk Kato, Mako – who recently lost his grandmother and sister – says he felt the finite nature of flesh and blood. “It made me realize that we are all walking toward death everyday, step by step. I will (die) one day, as everyone will. Feeling death as something real made me better prepared for that day.”

“Contemplating your own death can lead you to think about your life more seriously,” Arata says, running her finger over criss-crossing scars etched into her arm.

She has tried to kill herself many times ever since she was a young girl, when she suffered from intense bullying, she says. “I have these scars all over my body.”

Japan has the seventh-highest suicide rate in the world, and the highest out of the G7 nations, according to the latest available OECD data.

In the wake of the financial crises in 1997 and 2008, Japan saw an uptick in suicides that coincided with job losses and widespread financial uncertainty. And there are fears the current economic gloom brought on by the Covid-19 pandemic might lead to another spike, particularly among the country’s young adults and those under 40, the most susceptible age group to suicide.

“I hope the Corpse Lab can offer them an opportunity to question their view on life and death, from inside a coffin,” Arata says.

She receives overwhelming numbers of messages and letters thanking her for relieving their pain and for saving them.

It is a tiny fraction in a country where some 20,000 people kill themselves annually, but Arata hopes to give people a safe space to think about their own life and death without social prejudice.

In addition to providing the unique, interactive services, which can cost several hundred US dollars, Arata takes photographs so her clients can have a record of the experiences.

She says her customers are all looking for a place where they can be loved, accepted and approved. “They are all great human beings but have very low self-esteem. Their desire to change or be accepted and loved is so strong and this is the only place for many of them. I want to be there for that.”

How does she feel when she receives messages from her customers thanking her for saving them?

“It’s the other way around,” Arata insists. “My customers are the ones who give me strength to live my life. I’m saved by them.”