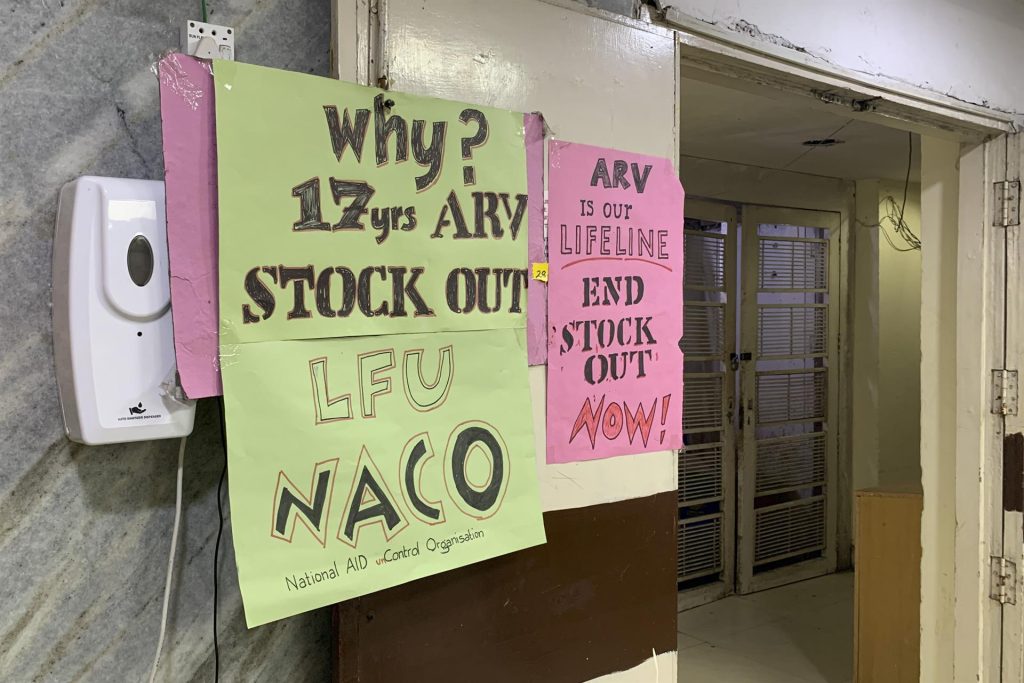 A months-long shortage of antiretroviral drugs has forced around a dozen HIV positive people to camp at the headquarters of India’s National Aids Control Organisation (NACO) – with mounting anger at the “pharmacy of the world” being unable to supply essential medicines to its own people, although the government has denied the charge.

Sitting amid mattresses, placards with demands and noisy fans that tried to beat the heat, Loon Gangte spoke about the problems the patients faced in accessing the free supply of medicines such as dolutegravir (DTG) – recommended by the World Health Organisation – through the Indian health system.

“We are suffering,” said the activist from Delhi Network of Positive People, who has been protesting for two weeks. “Money is here, medicines are here, NACO people are here. Someone is not doing their work.”

Gangte explained there was no general shortage of medicines in the country, which is the largest manufacturer of generic medicines in the world and supplies over 80% of the antiretroviral drugs used to fight against AIDS worldwide.

Available in private pharmacies at market price, the medications are distributed free in special centres for people living with HIV through a NACO-backed programme, which carries out a centralised purchase to minimise costs and then distributes the drugs to different states.

However, the activist said many regions had been facing shortages for at least five months now. “In Delhi right now people are getting 10 days’ (supply). That means in a month, they had to come three times to take ARVs.”

Before the Covid-19 pandemic, which disrupted the government response to AIDS and other disease such as the tuberculosis, it was the norm to distribute medicines sufficient for a few months at once – in line with WHO recommendations, which suggest that six-months’ or at least three-months’ supply should be handed out.

The association has also received reports of shortages in states such as Manipur (northeast India), Kerala (south) as well as Uttar Pradesh and Bihar (north).

Nearly 1.6 million of India’s 2.4 million persons living with HIV use antiretroviral drugs, according to NACO data, and the supply disruption has become a heavy burden for many.

The underprivileged patients are the worst affected as they cannot afford to lose a work-day dealing with a bureaucratic process that makes it mandatory for people with HIV to physically visit the special centres to get the medicines.

Hari, a Delhi resident, said “it’s very hard to go again every 10 days to the centres: our livelihood is disturbed and our time is also money.”

He acknowledged the situation had improved compared to 1998, when he first started taking ARTs and had to pay around ₹1,000 per month out of his own pocket and even had to sell property to secure treatment.

However, Hari stressed the system had failed in assessing how many people required first, second and third line of antiretroviral medicines.

Gangte said the problem lay in NACO’s process of inviting bids for medicine purchase, which had been delayed.

For the officials “it is their job, it is their pay. But for us, it is our life,” said the activist.

He displayed a NACO circular issued in May that recommends “alternative” ARVs due to the dwindling stocks of medicines such as dolutegravir.

However, the Indian government has officially denied there is a disruption in the supply of these medicines.

Junior minister of health and family welfare Bharti Pawar said last week in the parliament “there is adequate stock of ARV medicines nationally for around 95% people living with HIV in India, who are on various 1st and 2nd line ARV regimens.”

Although the minister acknowledged some individual centres may witness problems “sometimes,” she claimed that these were immediately restocked from nearby centres.

At the NACO office, the activists vow to camp “as long as required” to demand at least one month’s worth of supplies per medical visit.