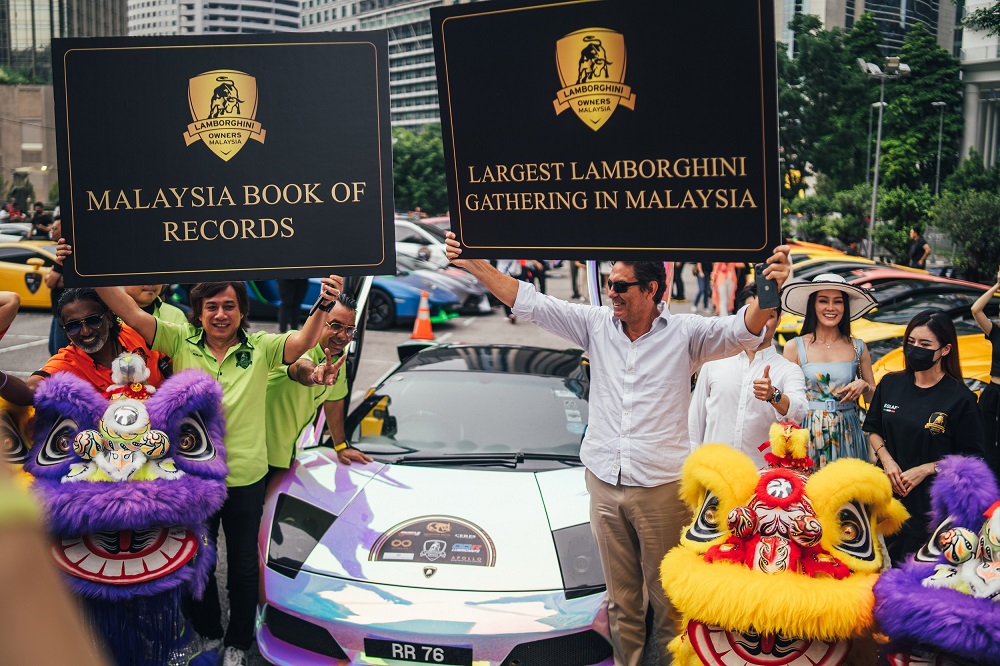 The signature roars of 112 Lamborghinis reverberated on the streets of Kuala Lumpur yesterday morning as members of Lamborghini Owners Malaysia (LOM) assembled to break a record set almost a decade ago at the very same venue.

In 2013, the first record setting attempt was in conjunction with Lamborghini’s global 50th anniversary celebrations, with 77 participating owners from both Malaysia and Singapore.

Inducted into the Malaysia Book of Records back then as the largest gathering of Lamborghinis at an event, a new record has been recognised nine years later – this time by Lamborghini owners from across Peninsular Malaysia.

This record-breaking gathering was not only joined by existing members of LOM but also Lamborghini owners who are keen to be part of the expanding club.

“This milestone in our club’s history also marks our ode to the legendary Lamborghini brand, which celebrates beauty and performance, infused by an indomitable spirit,” said LOM president Roslan Rosdi.

Taking place at the open-air carpark fronting the Mandarin Oriental hotel in the heart of KL city centre, onlookers were treated to a visual and auditory feast.

Spotted were vintage and rare Lamborghini models such as the Gallardo Malaysia Limited Edition (of which only 20 were ever produced) and Murcielago amidst more modern standouts such as the Lamborghini Huracan Spyder, Aventador SVJ and Urus SUV.

Fans of the House of the Raging Bull were also treated to a lion dance which commemorated the moment car number 78, driven by the LOM president himself, entered the car park signalling the successful record-breaking feat.

Rapturous cheers from both LOM members and the public accompanied the moment when officials from the Malaysian Book of Records handed over the certificate confirming the setting of a new record.

“Our record-breaking achievement would not have been successful without the sense of community showcased by our members who turned up this morning,” said Roslan.

Following a quick celebration at the carpark, a convoy of around 112 Lamborghinis were flagged off – departing from the city to the mountainous Bukit Tinggi where guests got to enjoy the glamorous Bulls Ball and a one-night stay at the scenic La Chateau Spa & Wellness Resort.