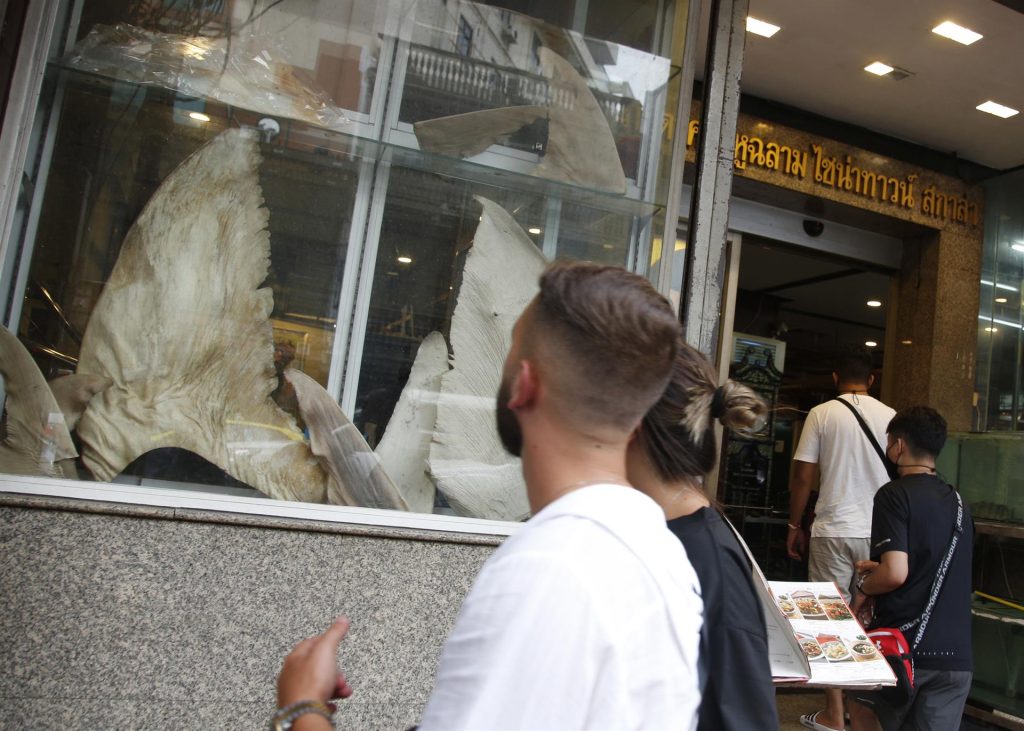 From steak to fin soup, visitors to Bangkok’s Chinatown find a plethora of shark products on offer – despite the drop in Chinese tourists to the Thai capital due to the pandemic and warnings from environmentalists that many of the species targeted for meat are threatened with extinction.

Dozens of Chinatown street stalls and restaurants hawk a variety of shark dishes – from the traditional soup to stews and fillets – which sell at double or triple the price of more conventional fish dishes.

“Most clients come and order this shark with rice, the shark soup, or the shark steak (which varies in price, between US$14 and US$274). These are the most popular dishes and our stars,” noted a hostess of a restaurant specialising in shark meat.

Although commonly linked with Chinese cuisine, the popularity of shark dishes weathered the drastic drop in Chinese visitors to Thailand during the pandemic, whose numbers fell by 83.2% in 2020 and 98.9% in 2021.

“Tourists are coming back,” says the owner of a modest street food stall that sells shark products for between US$8 and US$14.

“The traffic is almost like it was before the pandemic. Chinese customers have dropped, but there are many foreigners who want to try the (fin) soup simply out of curiosity.”

The NGO WildAid estimates that more than 73 million sharks are killed each year for their fins. A study by the Florida International University this month found that 70% of the shark species targeted for their fins are threatened with extinction.

“People always associate shark fin with luxury. It’s expensive, it’s rare to find, the economic reason, I think, it allows people to use shark fin as something to show off their status,” said Petch Manopawitr, a scientist and WildAid advisor.

Shark fin products are particularly popular in China, and the fishing and trade of shark goods is legal in a number of countries.

Thailand plays a key role in the shark meat supply chain and the export of low cost, processed shark fins, a report by the NGO said.

This is largely down to the fact that China is Thailand’s main commercial partner, with a bilateral trade volume of US$103.75 billion in 2021. Before the pandemic, 30% of foreign visitors to Thailand hailed from China.

The rising demand coupled with the regulatory limbo of shark fishing and trade prompted environmentalists last month to launch a campaign in Thailand aimed at drawing attention to the alarming decline of shark populations.

It was met with backlash from some shark meat merchants.

“I know that too many people, especially the foreigners, are against eating sharks. That’s why I don’t want exposure, but all I can say is that we need to find our way of living,” said another owner of a shark meat restaurant in Bangkok.

For WildAid advisor Manopawitr, such public campaigns are crucial in forcing policy changes around the protection and legislation on the shark meat market.