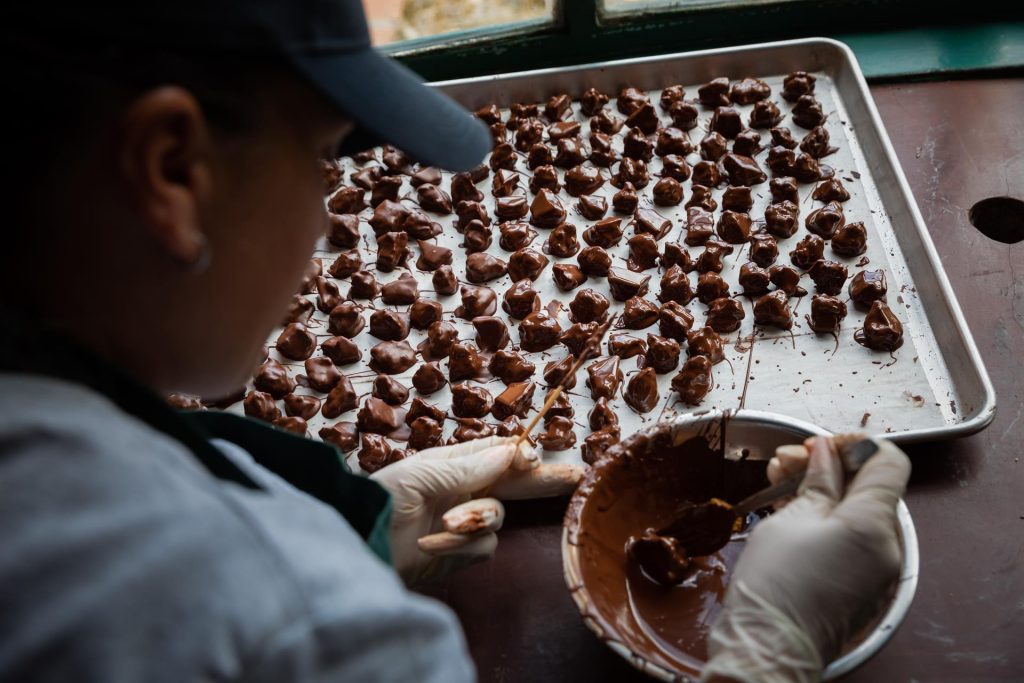 Marianela Moser and her two employees work from the early morning hours in a small workshop in the Avila mountains outside Venezuela’s capital, where they temper, mould and package different chocolate products.

But at nightfall a group of 10 elves from a nearby forest come inside and impart the taste and aroma that characterises Chocolate Picacho, claimed Moser – who founded that brand in 2007 and invented that mythical story with her youngest customers in mind.

“For chocolate to be just right, it needs to be as shiny as princess hair … as crunchy to the ear as elves’s footsteps in the woods, as dark as a moonless night and as soft in the mouth as the silk of a princess’s dress,” she said of the chocolate at her workshop in the highland village of Galipan.

Named after a mountain in the Avila range that is visible from the workshop, Chocolate Picacho is one of more than 50 industrial and craft chocolate brands in Venezuela – where that treat is sold virtually everywhere, including pharmacies and hair salons.

Entrepreneurs are drawn to that industry because of the ready availability of high-quality cacao beans, which are grown in parts of the Capital District and in 19 of Venezuela’s 23 states, according to sector representatives.

Moser, for example, works with cacao grown in northern, central and eastern Venezuela, which produces three types of that plant (Criollo, Forastero, and Trinitario).

“That’s a blessing of Venezuela,” said the 65-year-old Moser, whose brand makes a variety of chocolate products – milkless, dark and with marshmallows, toasted peanuts, caramel, roasted macadamia nuts and even passion fruit.

The businesswoman seeks out the ingredients herself, either making the trip down to Caracas or travelling to central Venezuela or different parts of the coast, including Barlovento, a leading cacao-producing region in Miranda state.

“I look for the ingredients because no one’s going to come up here to offer us cacao … We review the tastes, the aromas, (and) we then decide what product we can offer with that type of cacao,” Moser said.

Venezuelan cacao has “different characteristics and specifications” that depend on the region of the country where it is cultivated, said Enrique Flores, owner of an exporting company – Grupo Kacaoil – that was founded in 2017.

“Cacao doesn’t taste the same anywhere you go,” he insisted.

This business leader said Venezuela’s “fino de aroma” cacao is the key factor that makes the country’s chocolate among the best in the world.

“The genetic makeup of Venezuelan cacao is what lends taste and aroma … to the chocolates.”

Flores even said chocolate producers in other countries use Venezuelan cacao’s intense flavours to enrich their products.

Grupo Kacaoil currently exports cacao to Canada, Trinidad and Tobago, China, Russia, France and the UK and is in talks to start shipments to the US.

In 2021, Venezuela exported US$44.89 million worth of cacao and its derivatives, up 24% from 2020, according to figures provided by the Association of Venezuelan Exporters (AVEX).