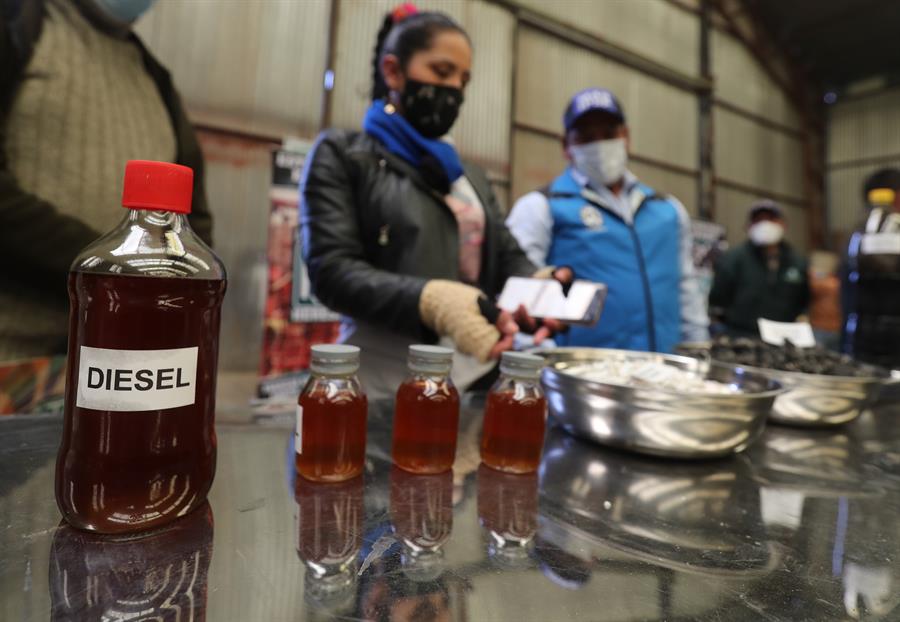 Bolivia is watching with interest a pilot project that is producing biodiesel from waste at a small plant in the second city of El Alto.

Engineers at the Heresi metallurgy pilot plant in the Nuevo Amanecer district yesterday presented their “microreactor for the conversion of waste into diesel” to the deputy minister of high energy technologies Álvaro Arnez, and Chamber of Deputies president Freddy Mamani.

The small plant takes waste – such as plastics, bags and tyres – and puts them through a process to condense them and generate diesel, explained Heresi plant manager Juan José Díaz.

The biodiesel it produces was tested by the National Hydrocarbons Agency, which verified its quality, he said.

The model industry can produce 112,000 litres per day, while the pilot plant presented to the authorities produces about 28 litres per day and uses approximately 90 tonnes of garbage, said Díaz.

The idea is this venture becomes a plant that produces high-quality biodiesel that is “friendly to the environment” and serves as an example for replication in other regions.

“The country generates enough garbage so that Bolivia does not have to import a single litre of diesel,” said Díaz.

It is estimated that if a larger plant can be built in the city, some 35 million litres of biodiesel could be produced annually, Díaz said.

Deputy Mamani indicated that one of the priorities of the government of president Luis Arce is to promote undertakings that help to substitute imports, so this project is of interest. “We are willing to work.”

Vice minister Arnez highlighted the importance of this pilot project which (the government) considers supporting so that it can grow and help reduce diesel imports.

Annually between US$1.2-1.4 billion is spent on the import of fuels, he added.

“The diesel and gasoline that is generated through this reactor has very little sulfur, almost minimal, and generates the reduction of toxic gases,” said Arnez.

In 2018, former president Evo Morales announced Bolivia’s entry into biofuels through a state policy in favour of bioethanol and biodiesel.

A biodiesel plant is also under construction in the eastern region of Santa Cruz and is expected to be operational in 2024, with a state investment of US$250 million and that could produce 3 million barrels annually.

This renewable diesel plant will reuse waste and vegetable oils.