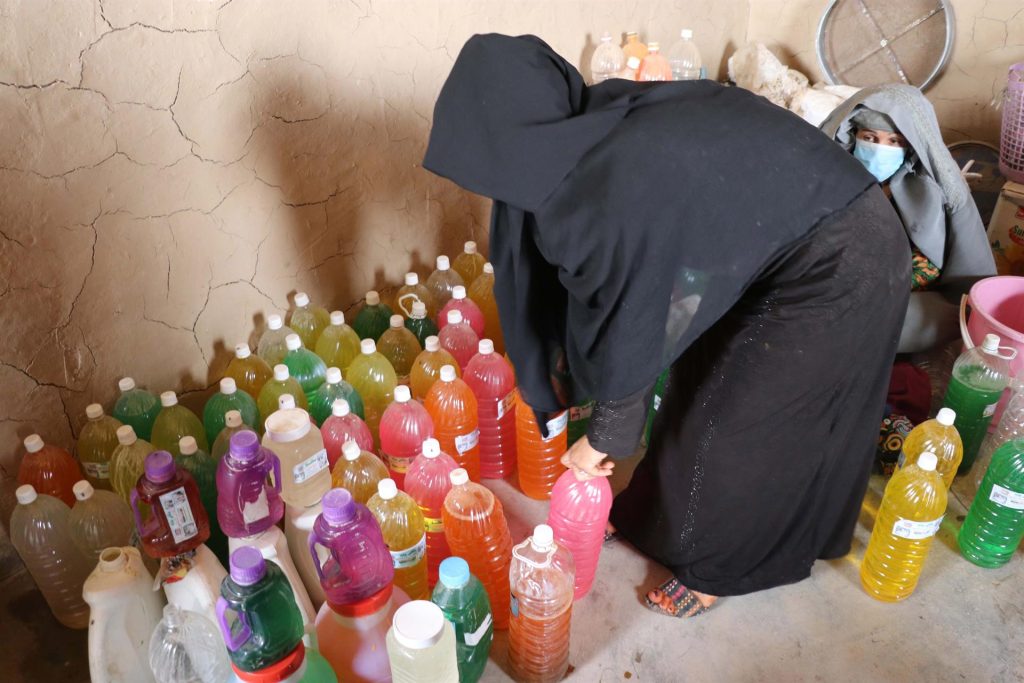 Saqi Jana Popalzai has managed to restore her business despite the difficulties she faced as an Afghan woman entrepreneur, with the Taliban returning to power and the ensuing socioeconomic crisis in the country.

Popalzai’s shampoo manufacturing unit is just one of the numerous Afghan businesses that flourished in the two decades following the US invasion.

The international community intervened to ensure women participate in public life, in sharp contrast to the conservative norms enforced by the first Taliban regime.

The US-backed government, that replaced the defeated Islamists in 2001, worked towards producing new opportunities for women for almost two decades.

However, the Taliban’s victory along with the subsequent harsh economic sanctions and the government’s curbs on women’s rights has taken its toll on Khkola, the company founded by the 35-year-old businesswoman.

Almost a year after the fall of Kabul, Popalzai is trying to sustain the business she established in Kandahar four years ago.

“The purchasing power has decreased, the cost of raw materials and packaging materials has gone up,” Popalzai noted.

She insisted she was still happy to stay afloat and help her family and employees, who were victims of internal displacement.

Social activist Nahid Noori said that under the Afghan regime, “women have lost their achievements of last 20 years, (like) the right to work and education.”

Over the past two decades, Afghan women had taken long strides, playing an active role in socioeconomic activities.

Women once constituted 37% of lawmakers and around 30% of government employees and reached leadership positions in national and international organisations.

Under the current regime, this “has decreased to almost zero. Adolescent girls have not had access to education in the last 347 days and most of the talented women have been restricted to the home,” Noori said.

Afghanistan continues to ban girls from attending high school as part of one of the first decisions of the Taliban after seizing power.

Popalzai became the breadwinner of her family as her husband struggled to earn a living.

“I decided to step up and do my best for my family, now with god’s grace I can support other 15 families (of her employees) as well,” the activist said.

It was not easy for the entrepreneur to start from scratch, without facilities, transport, or workers, and she had to walk for hours to distribute her products to different shops and supermarkets.

“It was very hard, walking around the city to sell the product, no demand in the beginning, no contacts, but I knew it will get better, finally we got a lot of orders from different provinces,” Popalzai said.

However, as Afghanistan faces sanctions and aid has dried up, the economic condition has deteriorated steadily, with the Taliban seemingly incapable of reviving the economy without foreign aid.

“The reduced purchasing and the increased cost of raw materials have created so many challenges for us and women entrepreneurs are struggling in Afghanistan,” Popalzai said.